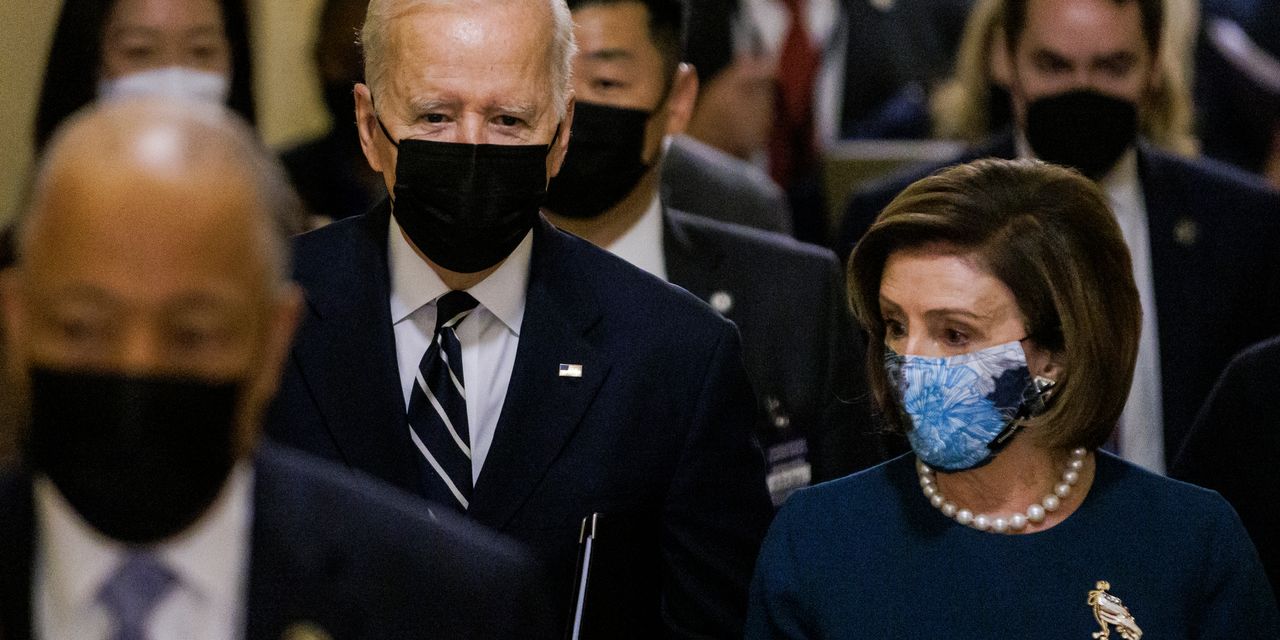 President Joe Biden on Thursday put forth a framework for a $1.75 trillion social-spending package, with provisions such as a one-year extension for a new child tax credit and universal preschool for all 3- and 4-year-olds.

The release came on the same day as Biden met with House Democratic lawmakers at the U.S. Capitol, as his party’s moderates and progressives worked to reach agreement on their sweeping measure that’s targeting “human infrastructure,” climate change and other Democratic priorities.

“We spent hours and hours and hours over months and months working on this. No one got everything they wanted, including me. But that’s what compromise is. That’s consensus,” Biden said as he talked up the framework in a speech at the White House.

Other provisions included tax credits for electric vehicles worth up to $12,500, reductions for Obamacare premiums and an expansion of Medicare to offer hearing benefits — but not dental or vision coverage.

Other controversial items left out were a proposed billionaires’ tax, paid family leave and two free years of community college, though Pell Grants would be increased. There also was no mention of SALT relief, which refers to easing a $10,000 cap on deductions from federal income tax for state and local taxes.

The White House release detailing the framework included the table below, showing spending that would total $1.75 trillion, then an additional $100 billion for immigration. That $100 billion for immigration would help with “reducing backlogs, expanding legal representation, and making the asylum system and border processing more efficient and humane,” the White House said.

The president and other top Democrats have been aiming to achieve a deal before he leaves for a trip to Europe that will focus in large part on climate change.

Biden met Thursday morning with House Democrats in an effort to “provide an update about the Build Back Better agenda and the Bipartisan Infrastructure Deal,” the White House said in a statement. He was slated to depart the White House for Europe in the early afternoon.

“Everybody’s on board,” Biden told reporters before the start of the meeting with lawmakers, when he was asked about whether his framework had the support of Sen. Bernie Sanders of Vermont, the influential independent who usually votes with Democrats.

Sanders, for his part, told reporters that Biden’s framework needed to be improved. Meanwhile, a key moderate Democratic senator, Arizona’s Kyrsten Sinema, said there had been “significant progress on the proposed budget reconciliation package. I look forward to getting this done, expanding economic opportunities and helping everyday families get ahead.”

Read more: What’s in — and not in — Democrats’ big social-spending bill, as Biden presses for deal before Europe trip

The White House release detailing the framework included a second table showing tax hikes and other sources for funding, with overall new revenue of up to $1.995 trillion.

Biden and other top Democrats have been aiming to advance a big social-spending package in tandem with a $1 trillion bipartisan infrastructure
PAVE,

bill that already has passed the Senate. Negotiations have dragged on for months because they need buy-in from all Democratic senators given the chamber’s 50-50 split. In the House, the party can afford no more than three defections on legislation if there’s no Republican support for it.

Top Republicans on Thursday criticized the Democratic Party’s proposed spending on social programs and climate change, along with how the framework was rolled out.

“I’ve talked about the laundry list of left-wing boondoggles that our colleagues are packing into this plan. At the heart of it all is one simple and dangerous assumption: that American families ought to be more reliant on the federal government,” said Senate Minority Leader Mitch McConnell, the Kentucky Republican, during a floor speech.

“When the White House rushes out a framework hours before the president comes to the Hill, you know they are desperate and just grasping for straws. This is no longer a Congress where the best ideas compete, but [it’s] now competing for a vote based upon when Air Force One lands in Rome,” said House Minority Leader Kevin McCarthy, the California Republican, during a news conference.

traded higher on Thursday as investors digested Biden’s framework as well as a weaker-than-expected reading for third-quarter gross domestic product.

“There appears to be some good news for financial markets from a possible deal on the tax provisions in the Build Back Better/reconciliation bill. A lot of the ‘worst-case’ elements appear to have been dropped including all provisions on capital gains increases,” said Stifel’s chief Washington policy strategist, Brian Gardner, in a note.

“Despite the announcement of the framework, the political situation remains fluid and could still change,” Gardner also wrote.