Home
Stocks
In One Chart: Here’s what’s in the $600 billion relief plan from 10 Republican senators
Prev Article Next Article
This post was originally published on this site

A group of 10 Republican senators has presented a counter-offer to President Joe Biden’s COVID-19 relief plan.

So what’s in the GOP’s package, which would cost less than a third as much as Biden’s $1.9 trillion proposal?

Their plan, which has a price tag of roughly $600 billion, includes $160 billion for what it calls “direct COVID pandemic response,” with the same amounts that Biden’s package has for a national vaccine program ($20 billion) and COVID testing ($50 billion).

The elements of the GOP proposal are shown in the table below, which has been posted online by some Republican senators. 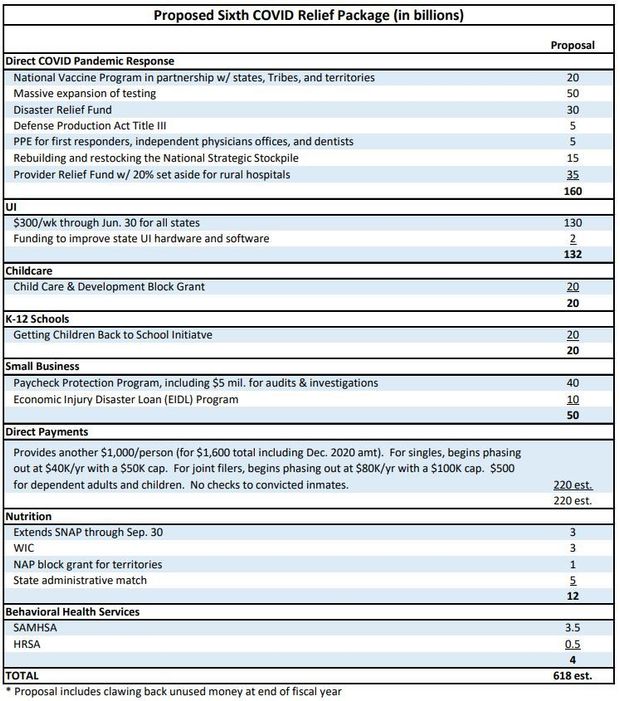 The group of 10 Republican senators is slated to meet with Biden at 5 p.m. Eastern on Monday.

“The bottom line is that this week’s potential action on a budget resolution is probably the beginning of a process that will take several weeks to complete and produce a bill that could be less than half the size of the Biden administration’s original proposal,” said Brian Gardner, chief Washington policy strategist at Stifel, in a note.

Gardner said Democratic lawmakers do not have 50 votes lined up in the Senate to pass Biden’s $1.9 trillion proposal, as Democratic Sen. Joe Manchin of West Virginia has pushed back against its size and scope, and Democratic Sen. Kyrsten Sinema of Arizona, “who has been quieter than Manchin, might also be holding out for a smaller, more tailored bill.”

But other analysts expect the end result will resemble Biden’s $1.9 trillion plan, passed through a process called budget reconciliation that only requires a simple majority in the Senate.

“Today’s White House meeting will be cordial and both sides may compromise — but not enough to satisfy the majority of members on both sides,” said Greg Valliere, chief strategist at AGF Investments, in a note. “So the reconciliation process, starting with a budget resolution this week, still looks like the best bet.”

U.S. stocks SPX, +1.18% DJIA, +0.64% were trading higher Monday as investors continued to watch for progress in Washington on an aid package.