Home
Stocks
Commodities Corner: Silver gets the GameStop treatment, rallies by as much as 13%
Prev Article Next Article
This post was originally published on this site 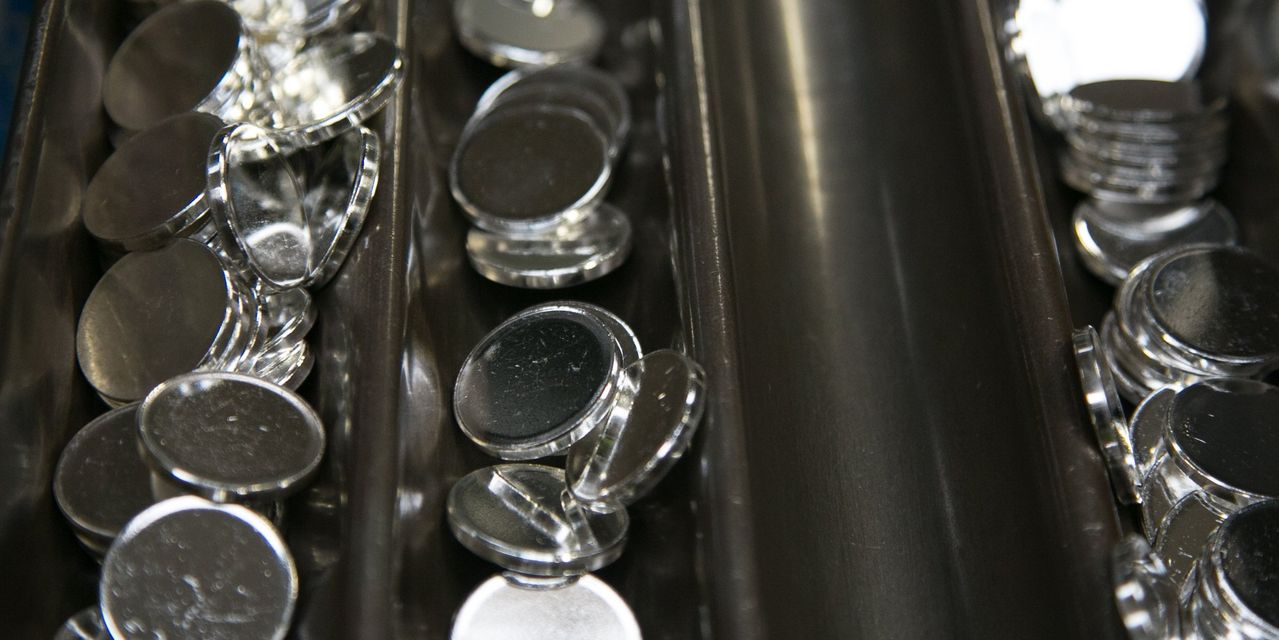 Silver prices rallied Monday to their highest intraday level since 2013, as a buying frenzy attributed to a post on Reddit last week suggesting a short squeeze on the precious and industrial metal continued.

Futures prices last week climbed by more than 5%. A surge in prices Thursday and Friday followed a posting by a Reddit user suggested executing a “short squeeze” on the metal.

“But we need to see if it can be done again. Remember, GME [GameStop] was a deeply undervalued and unique situation,” he said.

Read: Is GameStop’s surge market manipulation by a mob of Reddit users, a savvy group of investors — or both?

The move in silver brought on comparisons to the early 1980s, when the Hunt brothers famously tried to corner the silver market.

During the Hunt brothers’ accumulation of the silver, prices of silver bullion rose from $11 an ounce in September 1979 to $49.45 an ounce in January 1980 based on London PM Fix, according to The Silver Institute, which also said silver prices then fell to below $11 an ounce two months later.

“The difference between then and now in silver of course is that that was one family trying to orchestrate a short squeeze on the futures market, whereas now it’s like the financial equivalent of a Distributed Denial of Service attack — lots of people just independently deciding to go along with the crowd in a momentum trade,” said Marshall Gittler, head of investment research at BDSwiss Group.

“The other big difference — and the difference with GME for example — is that there isn’t anyone identifiable that they’re attacking,” he told MarketWatch.

Gittler said that “during a speculative mania, there are no limits” to how high prices can go. “At some point of course sellers will come in and start shorting. In 1980, people were literally selling the family silver, melting down silverware and selling it. Eventually we could see that.”

The all-time settlement high for most-active silver futures was $48.599 an ounce on April 29, 2011, based on FactSet data going back to November 1984, according to Dow Jones Market Data.

“Adjusted for inflation, that would be $56 now,” said Gittler. “Not impossible at all. But silver was pretty calm before this event, which makes me think that the market was fairly well balanced.”

“ It’s likely “a dangerous market to be in. Certainly not a market for investors, more for day traders at this point.”  ”

Gittler referred to the silver moves as a “pure momentum trade, not a short squeeze, so once it stops going up people are likely to take their profits pretty quickly.” It’s “likely to be a dangerous market to be in. Certainly not a market for investors, more for day traders at this point.”

So far, what’s happened to silver in the last few days is “not even close” to what happened with the Hunt brothers, said Bulwark Capital’s Abraham.

“In addition, they don’t control anything,” he said, referring to the Reddit crowd. “I think for this reason alone, going after a commodity like silver is futile.”

Still, many analysts had already been touting upbeat prospects for silver even before the Reddit-induced frenzy.

Abraham said his company invested in silver on expectations that a short squeeze in silver would occur, and didn’t take the Reddit WallStreetBets forum into consideration when investing.

“Silver is still cheap. Not a bad idea to buy some for the long haul,” he said. “Might make sense to buy silver miners as well. Just know both can be extremely volatile.”

He believes that $100 silver prices aren’t out of the question during the next run for the metal. “Silver is horrifically undervalued, on a historical basis, compared to financial assets.”

Michael DiRienzo, executive director at The Silver Institute said the fundamentals of the market are “beyond what you’re seeing in terms of activity in the market.”

The market saw lower mine supplies in 2020, with production offline due to COVID restrictions, so there’s less supply and more demand for the metal, he said. Inflows into silver exchange-traded products grew by 331 million ounces in 2020, and holdings ended the year at more than 1 billion ounces, said DiRienzo.

The Silver Institute projects the annual silver price will average $30.13 an ounce and that physical investment will hit a six-year peak this year.

Ryan Giannotto, director of research at GraniteShares, meanwhile, said one of the big questions right now is whether “Redditors have what it takes to recreate GME magic with silver.” So far, “it looks like no—we are seeing movements of roughly 10%, not 100%, in silver prices. Many of the elements that aligned perfectly in the GameStop squeeze don’t apply, or at best are poorly replicated, in silver markets.”

He said that the market isn’t actually short silver, which would be the precondition to a massive short squeeze. “There is a difference between running low on silver supply, and investors betting silver prices will fall.”

There is only a finite amount of GME stock, but “production in silver can easily be ramped up and new sellers can enter the market,” said Giannotto. And “while silver is a smaller market than gold or any other major asset class, it is still a far larger market than a GameStop, a single quasi-defunct small cap stock. The Redditors are simply not optimizing their purchasing power.”

If Reddit’s WallStreetBets crowd “really wants to maximize their purchasing power in the precious metals space, they should target smaller markets that are far more scarcely produced, such as platinum,” said Giannotto.

“Whereas 27,000 tons of silver are mined each year, only 160 tons of platinum are produced annually — platinum is simply a much better target for a run-on supply than silver,” he said.