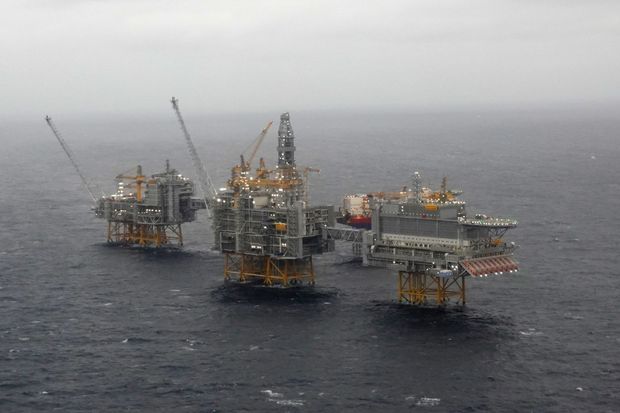 Oil futures climbed Wednesday, adding to the week’s gains on optimism that the prospect of COVID-19 vaccine will support an economic recovery, along with industry data that showed a large drop in U.S. crude inventories.

Prices have continued to push higher on this week’s vaccine news, and the report from the American Petroleum Institute, a trade group, showing a bigger-than-expected decline in weekly U.S. crude supplies contributed to the day’s gain for oil prices, said ED&F Man Capital analyst Edward Meir.

“But juxtaposed against this, are growing lockdowns in Europe and more restrictions being imposed in various U.S. states that are bound to hurt energy demand over the short-term,” he said in a Wednesday note. “We think that oil could come under renewed pressure once this current rally plays out, as the vaccine breakthrough is not imminent in terms of widespread distribution just yet, while demand destruction is getting worse right now.”

WTI is up more than 14% so far this week, while Brent has rallied more than 13% in a rally sparked by the announcement early Monday by Pfizer Inc. PFE, -1.11% and Germany-based BioNTech SE BNTX, -2.00% that their COVID-19 vaccine candidate proved more than 90% effective in preventing new infections in a trial. The vaccine remains weeks away from potential approval and it would likely be months yet before widespread distribution, but the prospect of light at the end of the tunnel has sparked big moves across markets.

The path of least resistance for crude is to the upside, as Brent crude broke through several important levels, said Fawad Razaqzada, analyst at ThinkMarkets, in a note. “So expect dips back to support to be defended,” he said, referring to the chart below. 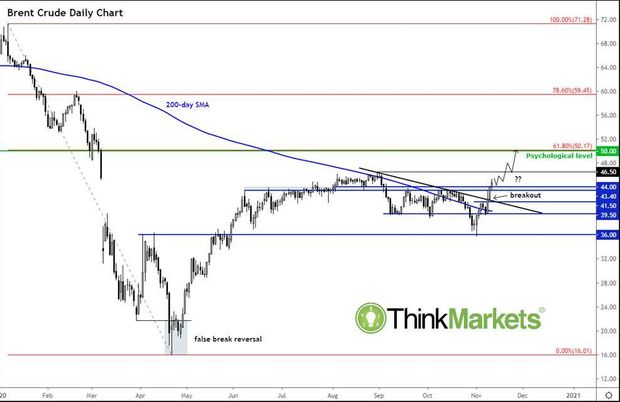 Brent crude broke above a bearish trend line in place since early summer, as well as resistance in the $43.40-to-$44 range, an area that is now the “first support zone” for bulls to defend, Razaqzada said. A fall through that area could see Brent test the upper end of a broken trend line around $41.50. On the upside, the $46.50 area is the next upside target for the bulls, followed by the psychologically important $50 level, he said.

Oil prices rose despite lower 2020 demand expectations from the Organization of the Petroleum Exporting Countries. In a monthly report released Wednesday, OPEC lowered its global oil demand forecast this year by 300,000 barrels per day to 90.01 million barrels per day. That would be down by roughly 9.8 million barrels a day from last year’s estimated world oil demand total.

More closely followed inventory data from the Energy Information Administration will be released Thursday, a day later than usual due to Wednesday’s Veterans Day holiday. The EIA data are expected to show crude inventories down by 3 million barrels last week, according to analysts polled by S&P Global Platts. They also forecast supply declines of 600,000 barrels for gasoline and 2 million barrels in distillates.

December natural gas NGZ20, -0.13% traded at $2.961 per million British thermal units, up 0.4%. The weekly EIA report on natural-gas supplies in storage has been postponed to Friday because of Wednesday’s holiday.