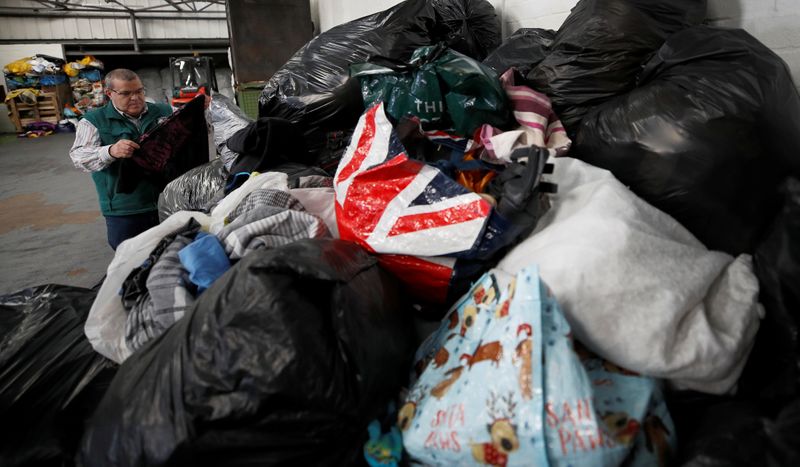 The multi-billion-dollar trade in second-hand clothing helps prevent the global fashion industry’s growing pile of waste going straight to landfill, while keeping wardrobes clear for next season’s designs. But it’s facing a crisis.

Exporters are struggling, as are traders and customers in often poorer nations from Africa to Eastern Europe and Latin America who rely on a steady supply of used clothes.

The signs are everywhere.

From London to Los Angeles, many thrift shops and clothing banks outside stores and on streets have been deluged with more clothes than could be sold on, leading to mountains of garments building up in sorting warehouses.

Since the COVID-19 pandemic began early this year, textile recyclers and exporters have had to cut their prices to shift stock as lockdown measures restrict movement and business slows in end markets abroad. For many, it’s no longer commercially viable and they can’t afford to move merchandise.

“We are reaching the point where our warehouses are completely full,” Antonio de Carvalho, boss of a textile recycling company in Stourbridge, central England, wrote to a client in June, asking for a price cut for clothes he collects.

De Carvalho pays towns for clothing collected in his containers then sells it on at profit to traders overseas.

Since May, he said, the price he has been able to charge overseas buyers had dropped from 570 pounds ($726) a tonne to 400 pounds, making it hard for his company, Green World Recycling, to cover the costs of collecting and storing items.

Buyers were also asking to increase the credit periods before they had to pay from 15 days to 45-60 days, adding to cash-flow problems, de Carvalho wrote.

“We are losing … a huge amount of money, making a big loss for the operation.”

‘GOING OUT OF BUSINESS’

De Carvalho’s experience is mirrored across the sector, suggesting that, even once the pandemic passes, the battered trade could take a long time to recover.

Recyclers are removing clothes banks from streets, reducing the number of times they are emptied per week and looking at laying off workers to conserve cash, according to Reuters interviews with 16 market players in Britain, the United States, Germany and the Netherlands.

At the same time, in a bleak irony for such firms, donations have mounted as people stuck at home clear out their wardrobes – a boon in normal times.

“This is unlike any other recession in a century,” said Jackie King, executive director of U.S. trade body the Secondary Materials and Recycled Textiles Association (SMART). “I would anticipate there will be companies going out of business.”

The retreat of recyclers is having far-reaching consequences for an industry that has seen an annual average of more than $4 billion of used clothing exported globally over the five years to 2019, according to U.N. trade data.

Exports have shrunk this year.

In Britain, the weight of used clothing exported from March to July was around half what it was for the same period last year, official trade data shows. Exports improved in July – the latest month on record – as merchants rushed to shift stock as countries began to re-open, but were still down around 30%.

In the United States, the value of exports from March to July fell 45% compared with the same period last year, government data shows.

Up to a third of clothes donated in the United States – the world’s biggest exporter of used clothing – ends up for sale in markets in the developing world.

The consequences of the decline can be seen in countries like Kenya, which imported 176,000 tonnes of second-hand clothing in 2018, equivalent to over 335 million pairs of jeans.

Business is sluggish in the open-air Gikomba market in Nairobi, one of the biggest second-hand clothes market in East Africa. Shop assistants stand idle while traders call out to shoppers asking them to try their garments

Traders have been hit with a double-whammy of the shrinking supply, exacerbated by the government banning the import of used textiles in March on concerns they could carry the novel coronavirus, and a drop in footfall due to people staying home.

“Before coronavirus came in, I would manage to sell at least 50 (pairs of) trousers a day,” said trader Nicholas Mutisya, who sells jeans and hats. “But now with coronavirus, even selling one a day has become difficult.”

“We cannot buy bales (of clothes) directly, so we buy our stock from those who have already bought them.”

The ban on used textiles imports was lifted in August after pushback from traders in Kenya and industry bodies in Europe and the United States who said second-hand clothes were safe as the virus could not survive the journey to Africa.

Yet the struggle continues for traders like Mutisya and Anthony Kang’ethe, who works as a driver for a shop selling second-hand clothes in bales shipped from Britain. He said the business had been hit hard by the supply crunch.

“Before we used to have five workers in our company,” Kang’ethe said. “We are left with two.”

DARK SIDE OF FASHION

Large-scale commercial trade in second-hand clothing from Europe and the United States to emerging markets took off in a big way in the 1990s due to growing African and Eastern European demand for Western fashion.

Such demand has provided a badly needed release value for a booming fashion market, where clothing production has approximately doubled over the past 15 years, according to sustainability charity the Ellen MacArthur Foundation.

The fashion industry is the second-biggest consumer of water and is responsible for up to 10% of global carbon emissions – more than all international flights and maritime shipping combined, the U.N.’s environment programme said in March 2019.

Meanwhile, clothes account for a massive, and growing, pile of waste that ends up in landfills.

In Britain, shoppers buy more clothes per person than any other country in Europe, amounting to some five times more than what they bought in the 1980s, according to a 2019 UK parliamentary report by the Environmental Audit Committee.

About 300,000 tonnes of clothing goes to landfill or incineration per year, the report said.

The United States produces just under 17 million U.S. tons (15.4 tonnes) of textile waste per year, according to the Environmental Protection Agency – equivalent to around 29 billion pairs of jeans. Two-thirds of this ends up in landfills.

Many fashion retailers, including Zara owner Inditex (MC:ITX) and H&M, encourage shoppers to bring unwanted textiles to their stores for collection and, in the case of H&M, even offer discounts on new purchases in exchange.

Only a small proportion of clothes collected by Inditex end up for sale in international markets, a company spokesman said. H&M said clothing collected in its stores was processed by I:CO, a unit of German textile recycling company Soex.

“The whole problem is just getting bigger,” said Anna Smith, a doctoral researcher at King’s College London looking at a so-called circular economic system, which aims to eliminate waste.

“People are consuming more and more.”