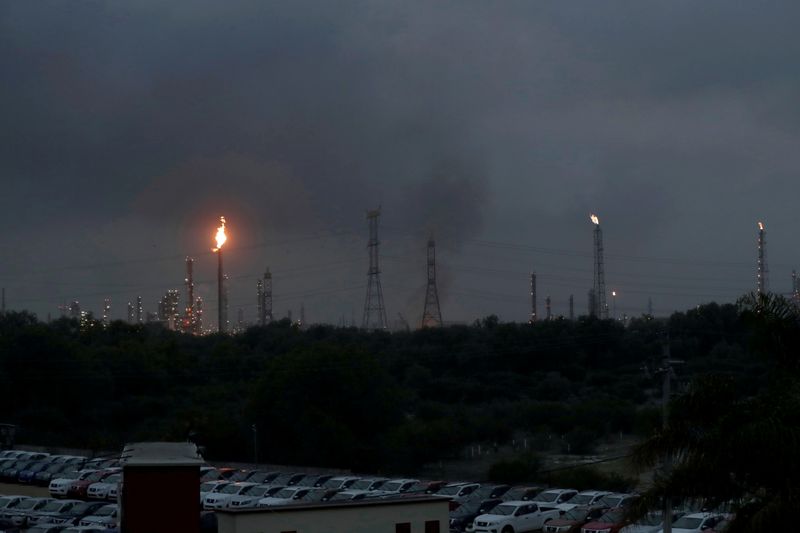 MEXICO CITY/LONDON (Reuters) – At a time when oil production is at historic lows, lenders who want Mexican oil giant Pemex to adapt to climate change are struggling to be heard.

Big oil companies such as BP (L:BP), Royal Dutch Shell (L:RDSa) and Repsol (MC:REP) have begun to build strategies to cut the carbon they emit. But state-owned Petroleos Mexicanos [PEMX.UL], one of the biggest borrowers in emerging markets, is determined to push in the opposite direction, three people in the company and in the government told Reuters.

President Andres Manuel Lopez Obrador, a leftist oil nationalist, has staked his reputation on reviving Pemex, which has been a powerful symbol of Mexican self-reliance since its creation in 1938 but is now heavily indebted. Earlier this year, Pemex became history’s largest “fallen angel” – a borrower that descends from investment grade to junk.

Lopez Obrador has said rehabilitating the country’s six outdated oil refineries and building a seventh one in his home state, Tabasco, is key. He considers the new refinery a milestone towards energy independence, one top source in the finance ministry said, adding that this concern has become more pressing in light of U.S. President Donald Trump’s power to stifle Mexico’s economy. Lopez Obrador is determined to keep Pemex focused on exploration for oil, the sources said.

Pemex, which employs nearly 150,600 workers and is the source of almost a fifth of Mexico’s budget revenues, is set to be a critical test case for both institutional investors and climate change campaigners looking to push through change.

If its management does not heed calls to curb carbon emissions, “it will become tougher for them to issue debt,” said Marie-Sybille Connan, an analyst at asset manager Allianz (DE:ALVG) Global Investors.

Investors have rarely spoken about their engagement with Pemex management, but Allianz is one of four major lenders who are now going public. Nearly 90% of the oil company’s $107.2 billion total financial debt is held by bond investors, Refinitiv Eikon data, quarterly reports and filings related to recent refinancing transactions show. On top of this, it has $64.9 billion in pension liabilities.

“It will become increasingly challenging for international institutional investors to invest in their bond issuances if they don’t address their sustainability concerns – whether climate, oil spills due to oil theft and health and safety,” Connan said.

The biggest challenge for both Mexico and Pemex is the fact that there are other things that take priority, said Aaron Gifford, emerging market debt analyst at T.Rowe Price, one of the largest holders of Pemex bonds. After the taxes the company pays to the government, there’s no money left to invest in new ways to produce oil.

“We’ve been very keen on speaking to Pemex’s board and really trying to get them to commit to making changes for good,” said Gifford. But management has canceled a lot of investor meetings and calls.

“Those meetings that I’ve been in, they’ve been very tense and sometimes even a little bit heated,” he said. “We have so many questions for them.”

Pemex, the Mexican finance ministry and the president’s office did not respond to requests for comment. Lopez Obrador, who has pointed to Mexico’s state-run hydroelectric plants to show he backs renewable energy, has blamed his predecessors for Pemex’s problems. Financial debt surged by 75% under the last government, a Reuters analysis of accounts from the past decade shows.

On paper, Pemex is barely solvent. Its liabilities exceed its assets by more than $110 billion, its accounts show. The reason international investors keep lending is because the market considers the Mexican government has given an implicit guarantee for Pemex.

This support was reiterated in April, after Pemex’s bonds were downgraded. “Now, more than ever before, Petroleos Mexicanos has the absolute backing of the federal government,” company executives said in a letter on government-headed notepaper to investors, seen by Reuters.

Market pressure is already building. The company’s yield spreads have widened, showing it is already getting harder to borrow as even yield-hungry investors are rethinking their investments. Yields on Pemex bonds are between about 7% and just under 9% for the most frequently traded ones as of Aug. 28, according to MarketAxess data.

Investors such as Allianz said that even if Pemex has pressing problems now, it shouldn’t ignore long-term objectives. None expect radical change, but the four who spoke to Reuters said they feel the company is not taking their concerns seriously.

If international investors become reluctant to lend, Mexico’s own access to credit could also be at stake. Ratings agencies have repeatedly cited the company’s unsustainable debt level as a risk factor for the sovereign rating. Mexico’s sovereign bonds are skirting the edge of a downgrade.

Climate Action 100+, a group of 450 asset managers with collective assets of some $40 trillion, told Reuters earlier this month it would add Pemex to the list of 160 companies it seeks to speak to directly to prompt them to develop strategies for a lower carbon future.

“When we look at what peers are doing, Pemex should do more, show more ambition in terms of commitment to reduce carbon emissions,” said Jaime Gornsztejn, who leads the engagement with Latin American companies for Federated Hermes (NYSE:FHI), a fund manager which is spearheading that effort.

He and others said companies such as Colombia’s Ecopetrol (CN:ECO) and Brazil’s Petroleo Brasileiro, or Petrobras (SA:PETR4), have gone further than Pemex to address climate concerns.

“We haven’t had much traction so far,” he said.

Pemex’s credit options are constrained by Mexico’s proximity to the United States. Even if other countries were hypothetically open to lending to the company, Jorge Sanchez, director at Mexican financial think tank Fundef, said it was unlikely Mexico would turn to them.

“It’s not about Pemex, it’s about geopolitics,” Sanchez said. “The United States won’t be happy if the main investors in Pemex, Mexico’s largest company, were Chinese or Russian.”

Pemex was the ninth biggest energy producer of carbon and methane emissions globally between 1965 and 2018, according to data from the Climate Accountability Institute, an NGO, with emissions of some 23 billion tonnes of CO2 equivalent.

That is less than the largest state-owned emitters, Saudi Aramco (SE:2222) and the National Iranian Oil Company, but more than any other Latin American oil company, the data showed.

Even so, sources with direct knowledge of the matter told Reuters the company has no plans to change its strategy.

Lopez Obrador’s energy agenda rolls back some of the moves made by his predecessor to open the energy market to the private sector. Next year’s budget will likely be dedicated to boosting oil extracted from shallow waters, one senior Pemex executive with direct knowledge of the draft proposal said, adding there was no allocation for greener policies.

While the President says he is committed to clean energy, he has justified government efforts to impede the roll-out of new privately built solar and wind capacity on the grounds that those plants were tainted by corruption in past administrations. “(Renewable energy) was used as a pretext for doing lucrative business … to get government subsidies, to push up the price of electricity and affect us all,” he said in July.    He has also complained that wind farms are an eyesore.

“There’s no way the government will consider another scenario for its energy policy,” a person at the oil company’s commercial arm PMI said, on condition of anonymity. “What they’re looking for is becoming a big player in exploration, production and refining.”

The kind of oil Pemex mostly produces, known as “heavy sour crude,” has fallen out of favor over environmental concerns because refining it tends to produce highly polluting sulfur-rich fuel oil.

Last December, Mexico’s energy regulatory commission agreed that the government could postpone a planned rule that would have required Pemex to produce and sell only ultra-low sulfur diesel across the country.

Pemex had asked the courts to give it more time to comply with the rule, saying Mexico lacked the infrastructure to comply.