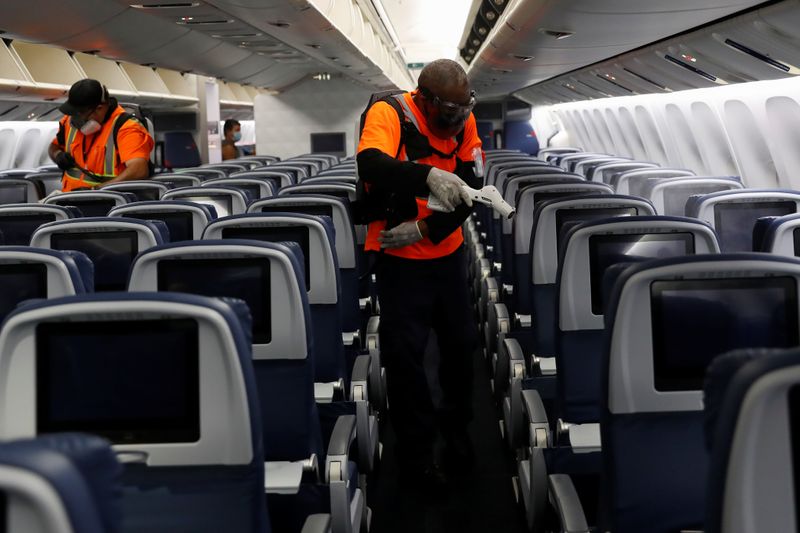 Airlines’ efforts to reassure travelers of their safety during the pandemic have spurred a behind-the-scenes scramble to complete the enhanced cleaning that they are promising without sacrificing turnaround times, a cornerstone of profitability, once more passengers take to the skies.

“We’ve done quite a lot of change to our turn process,” the head of Delta’s new Global Cleanliness division Mike Medeiros said in an interview detailing the airline’s strategy for “turns” — the time a plane spends on the ground between flights.

Depending on the aircraft’s size, Delta is deploying at least eight pre-flight cabin cleaners, up from three to five previously, and has adopted a new “pit stop mentality” based on industrial engineering studies into the extra resources required for cleaning each plane type, he said.

After cleaners spray with disinfectant and wipe down high-touch surfaces, a flight attendant and gate agent walk the cabin together to inspect. If the cabin is not up to par, they call back the cleaners.

“Even if that means taking a delay to the flight,” said Medeiros, who is among managers who receive daily cleanliness reports in their inbox based on customer surveys taken after every flight.

“As important as (being) on-time is to our company, we know that cleanliness, particularly in this environment but also going forward, will be just as important,” he said.

Delta’s average clean time for its domestic fleet is now 20 minutes, up from 10 minutes to 15 minutes previously depending on the aircraft size, but it aims to speed up the procedure to protect its turn times once schedules are heavier by adding resources.

To verify levels of cleanliness, Delta is purchasing ATP test kits that measure the amount of bacteria on airplane and airport surfaces. The kits cannot test for COVID-19.

It has already purchased 30 of the hand-held units, which cost about $1,000 each, to test the effectiveness of its cleaning program. The plan is to buy the tests for all of its global airport bases, though details are still being developed.

Among large U.S. rivals, American Airlines (O:AAL) said it has doubled the strength of its cabin cleaning crews but has not had to add extra time to its turns given lighter passenger loads and fewer scheduled flights.

United Airlines (O:UAL) said it has added some extra time to its cleaning process but not workers given the lighter loads.

Southwest Airlines (N:LUV), whose low-cost model depends on quick turns, has not added staffing and said this month it was scaling back some pre-flight cleaning with a view to preserving an average 45-minute turn once its schedule ramps up. It is still using an electrostatic and an anti-microbial spray that kill viruses and shield surfaces for 30 days, as well as a broad-spectrum disinfectant for lavatories and tray tables before every flight, but is not wiping down seat belts or arm rests.

All of the airlines are eyeing new cleaning technology. United, for example, is testing ultraviolet sanitation deployed by drones and hand-held wands for airport and aircraft surfaces. Delta is rolling out antimicrobial LED light technology by Vital Vio in all its aircraft restrooms that will continuously prevent the growth of bacteria, fungi, mold and yeast.

The airline is also in talks with Boeing Co (N:BA) and Airbus SE (PA:AIR) on developing touchless restrooms and is studying a UV light that would sterilize lavatories when they are not in use, Medeiros said.

Last week Delta said it would continue blocking middle seats through Jan. 6. Southwest is limiting seating capacity through October, while American and United are selling all seats. Beyond the jet, Delta is looking at bipolar ionization to improve air filtration at its airport facilities, including jetways. Airplanes already use hospital-grade HEPA that refresh air every two to four minutes. “We’re not afraid of adding costs to the business, but it has to add value,” said Medeiros. “If people are fearful or uncomfortable, travel won’t come back in the near term.”