Home
Stocks
Need to Know: The stock market is positioned to rally if it can clear this low bar, fund manager argues
Prev Article Next Article
This post was originally published on this site

It is still the beginning of earnings season.

Only 10% of S&P 500 SPX, +0.84% companies have reported results through Monday, and so far earnings are down a staggering 45% year-over-year, according to data from FactSet Research, which is more or less what the expectations are for the remaining companies.

Put another way — that is a pretty low bar. And that is why one fund manager is optimistic.

Salman Baig, multiasset investment manager at Swiss fund manager Unigestion, points out that during the first quarter, 65% of companies beat analyst estimates. While that sounds good, that is actually the worst percentage since 2009 and lower than the typical 75%.

“If this quarter’s results turn out to be a reversal from last quarter, where analysts overestimate the impact of lockdowns and many firms beat expectations, we could see a reversal of the market reaction as well, with beats rewarded more strongly than misses are punished,” Baig says in a note to clients.

After all, he points out, that is what happened in Europe in the first quarter, where analyst expectations were low after the region was hit by the coronavirus pandemic earlier than the U.S. In Europe, companies beating their estimates in the first quarter saw a median return of nearly 2% relative to the market, while firms that missed saw a median return of just -0.5% relative to the market; in the U.S., beats only outperformed by 0.8% while misses were punished by 2.5%.

So, why would companies outperform? Well, the economy. June retail sales for the U.S., for example, show that purchases are essentially back to their precrisis levels after five months, much shorter than the 33 months it took for them to recover after the 2008-09 financial crisis, Baig notes. Cyclical commodities, such as oil CL.1, +3.06% and copper HG00, +0.66%, have also recovered strongly, he says.

“A confirmation in micro data of the recovery on display in the macro data could lead to a positive shift in investor sentiment. With investor exposure to equities still low and massive money market reserves, such a shift would provide a significant boost to equity prices (and risky assets more broadly) and suggest that investors may finally be buying the economic recovery,” he says.

The number of new U.S. coronavirus cases and positive test rates fell slightly on Monday, according to data from the COVID-19 tracking project.

European leaders reached agreement on a €750 billion fund, which will contain €390 billion of grants aimed at the countries hit hardest by coronavirus.

Negotiations, meanwhile, continue for a new U.S. stimulus plan, which Treasury Secretary Steven Mnuchin said would be at least $1 trillion.

The German DAX DAX, +1.72% turned positive for the year after the EU plan was completed. 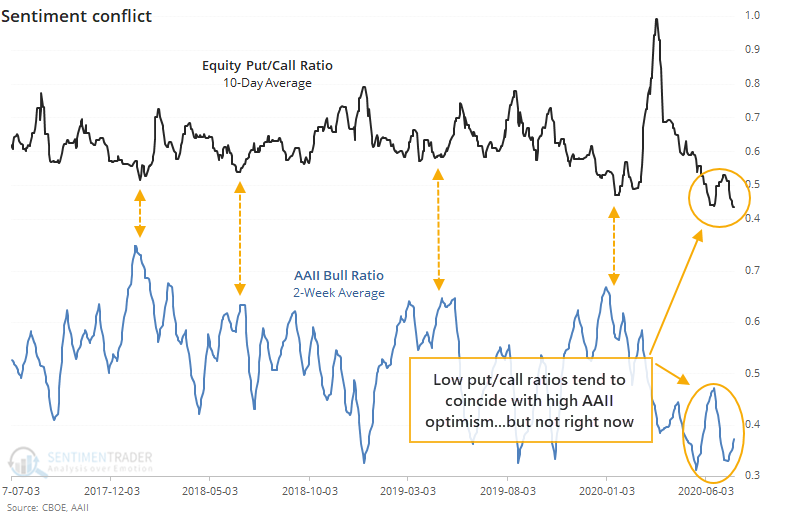 Traditional measures of market enthusiasm like the American Association of Individual Investors sentiment gauge don’t seem that bullish. Yet the 10-day equity-only put/call ratio is at its lowest level since 2000. “We always place more weight on real-money indicators as opposed to surveys, because people often say one thing but do another,” says Jason Goepfert of the SentimenTrader blog.

Grocer Trader Joe’s is to change the branding of some foods after an online petition calls it racist.

Will the Earth’s magnetic poles switch? Here’s what a new study finds.

Need to Know starts early and is updated until the opening bell, but sign up here to get it delivered once to your email box. Be sure to check the Need to Know item. The emailed version will be sent out at about 7:30 a.m. Eastern.