How To Save Our World Essays Henry James A Collection Of Critical Essays On Alice Cuban Missile Crisis Essay Thesis Ideas Essay On Freud Theory Of Personality
Home
Market
JBS sued over alleged violation of Brazil indigenous rights during pandemic
Prev Article Next Article
This post was originally published on this sitehttps://i-invdn-com.akamaized.net/trkd-images/LYNXMPEG511UG_L.jpg 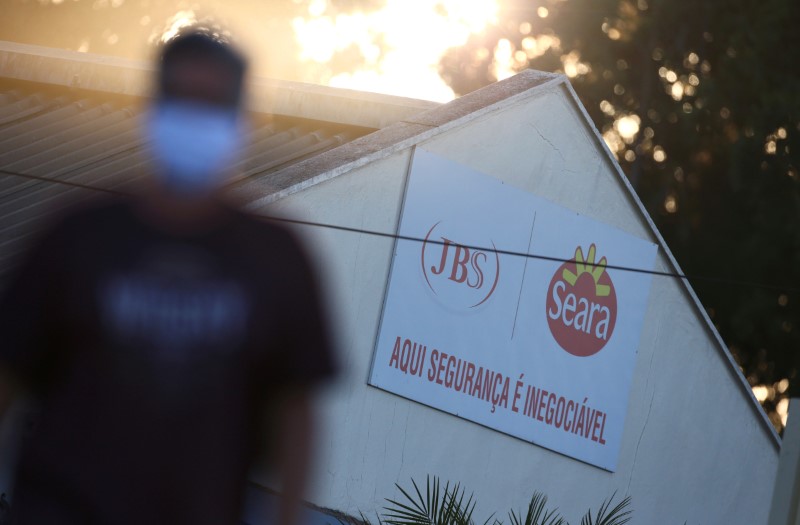 SAO PAULO (Reuters) – Labor prosecutors are suing meatpacker JBS SA (SA:JBSS3) for alleged violation of indigenous workers’ rights after 40 members of the Kaingang tribe were fired at once from a plant in southern Brazil, according to a court document.

The prosecutors claim in the suit filed on June 1 that JBS discriminated against these workers as the novel coronavirus pandemic escalates in the country.

JBS shares fell 1.1% in mid-afternoon trading, after rising as much as 1% at the open.

“They were dismissed in a critical period, when the return to the labor market is unlikely until the pandemic is controlled,” the prosecutors said.

They want JBS to re-hire the indigenous workers, and are seeking at least 10 million reais ($1.9 million) in fines and damages.

A decision is pending.

The dismissed employees of the Kaingang tribe commuted from the Serrinha indigenous land, where there were at least two confirmed cases of COVID-19, the disease caused by the new coronavirus, according to the court filing.

JBS confirmed dismissing 40 indigenous workers from its Seara chicken-slaughtering plant, but said the decision came after the company discontinued a bus service that brought the workers to the plant every day. JBS gave no reason for discontinuing the bus service, and denied any discrimination.

Prosecutors told Reuters they could not say whether the two people sick with COVID-19 worked at the JBS plant.

At least one fired indigenous worker was a pregnant woman, the prosecutors said. JBS denied this, adding all women employees in such a condition were placed on leave.

JBS noted the dismissed workers were paid in full what they were entitled to, and added that the plant in the small town of Seara employed 3,700 people, including 200 from indigenous communities in surrounding areas.

The indigenous workers at the plant were preemptively placed on leave as required by law to protect them amid the pandemic, JBS said.

The company said the workers fired on May 6 traveled 300 kilometers (186.4 miles) every day to get to the plant on transportation arranged by the company.