Home
Stocks
Economic Report: How high is the unemployment rate? One Wall Street firm says 21.7% — and it may be falling
Prev Article Next Article
This post was originally published on this site

Trying to peg the U.S. unemployment rate during the coronavirus pandemic is like hitting a fast-moving target, but a Goldman Sachs “real-time” estimate put it at 21.5% in May — and it may be falling.

The Labor Department’s official jobless rate comes out on Friday. Previously the department said unemployment soared in April to a post-World War II high of 14.7%, but that it would have been almost 20% if households that take part in the survey had answered the questions correctly.

Goldman’s 21.5% tally is based on the level of unemployment in the second week of the month, the same one the government uses to calculate the official rate. The firm’s estimate is a bit higher than the 19% consensus of economists polled by MarketWatch. 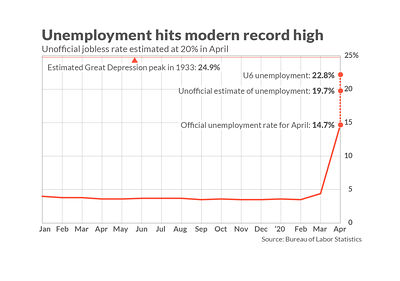 The news is not all awful. Since mid-May, more people have returned to job sites as states began to reopen their economies and the labor-market appears to have stabilized, Goldman analysts said in a new report titled “How High Is the Unemployment Rate?”

Still, the firm is unsure the unemployment rate has peaked.

On the downside, several million people have continued to apply for jobless benefits each week, suggesting the unemployment rate could edge a bit higher.

But limited evidence from state reopenings indicate a greater number of workers might end up returning to their jobs, and do so somewhat faster than expected. The number of people collecting traditional state unemployment benefits, for instance, fell by 3.9 million to 21.1 million in the seven days ended May 23. It was the first really good news on the labor-market front in months.

“The labor market is showing the earliest signs of recovery as states relax lockdowns and businesses reopen,” Goldman economists wrote.

Until very recently, Goldman had been predicting unemployment would climb to a pandemic high of 25% in June, marking the largest rate the U.S. has ever recorded. The government didn’t officially keep track of unemployment in the 1930s, but economic historians later estimated it reached 24.9% in 1933 during the worst of the Great Depression.

Now Goldman speculates the jobless rate might have peaked in May. In any case, Goldman said the jobless rate should start to fall later this summer as the U.S. economy recovers, dropping to 12% or lower by December.

Even under that scenario, millions of people who had jobs before the pandemic would still be without work. The unemployment rate had fallen to a 50-year low of 3.5% early this year before COVID-19 spread to the U.S.

Some 23.1 million people were officially classified as unemployed in April, a number sure to rise again in May. By contrast, just 5.9 million workers were considered unemployed in February.