Home
Stocks
The Tell: Get ready for stock-market ‘consolidation’ as China tensions rise, says Wall Street bull
Prev Article Next Article
This post was originally published on this site

After a sharp run-up for U.S. stocks, rising tensions between Washington and Beijing could spark a round of near-term consolidation that could prove to be an entry point for investors, a prominent Wall Street bull said Friday.

“Escalating tension with China as the global economy attempts to find its footing, coupled with such strong recent gains, opens the door for potential consolidation,” wrote Tony Dwyer, chief market strategist at Canaccord Genuity, in a note.

Read:The stock market has been rising — is that why Trump is attacking China?

The Dow Jones Industrial Average DJIA, -0.97% was down more than 260 points, or 1%, as investors awaited President Donald Trump’s 2 p.m. Eastern news conference, which he said Thursday would address China’s efforts to curb Hong Kong’s autonomy via new national-security laws. The S&P 500 SPX, -0.61% was down 0.6%.

The Dow and S&P 500 on Wednesday closed at their highest levels since early March as equities continued to reclaim ground lost in a bear-market slide that began in February as the COVID-19 pandemic took hold.

Dwyer on Tuesday urged investors to adopt a more offensive posture as stocks broke out of the trading range that held since early April, followed by a Wednesday note that acknowledged the strength of the market’s upside move and a bout of “extreme rotation” into previously lagging sectors, including financials, could lead to a period of consolidation.

Citing research from Sundial Capital, Dwyer noted that when the S&P 500 goes from periods of extreme weakness, with less than 10% of stocks above their 50-day moving average, to a situation where more than 90% trade above that level, the market tends to consistently show strength over 3-, 6- and 12-month periods, albeit with bouts of near-term consolidation (see chart below). 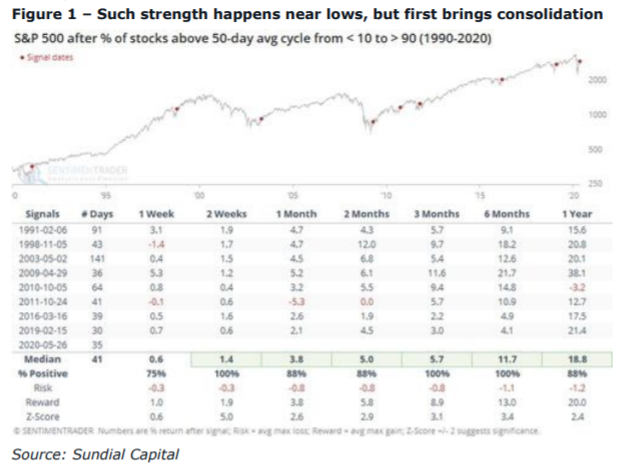 Dwyer said near-term consolidation would likely present “entry-point opportunity.” Meanwhile, “it appears the president might be giving the market the excuse for that consolidation opportunity over coming weeks,” he said.