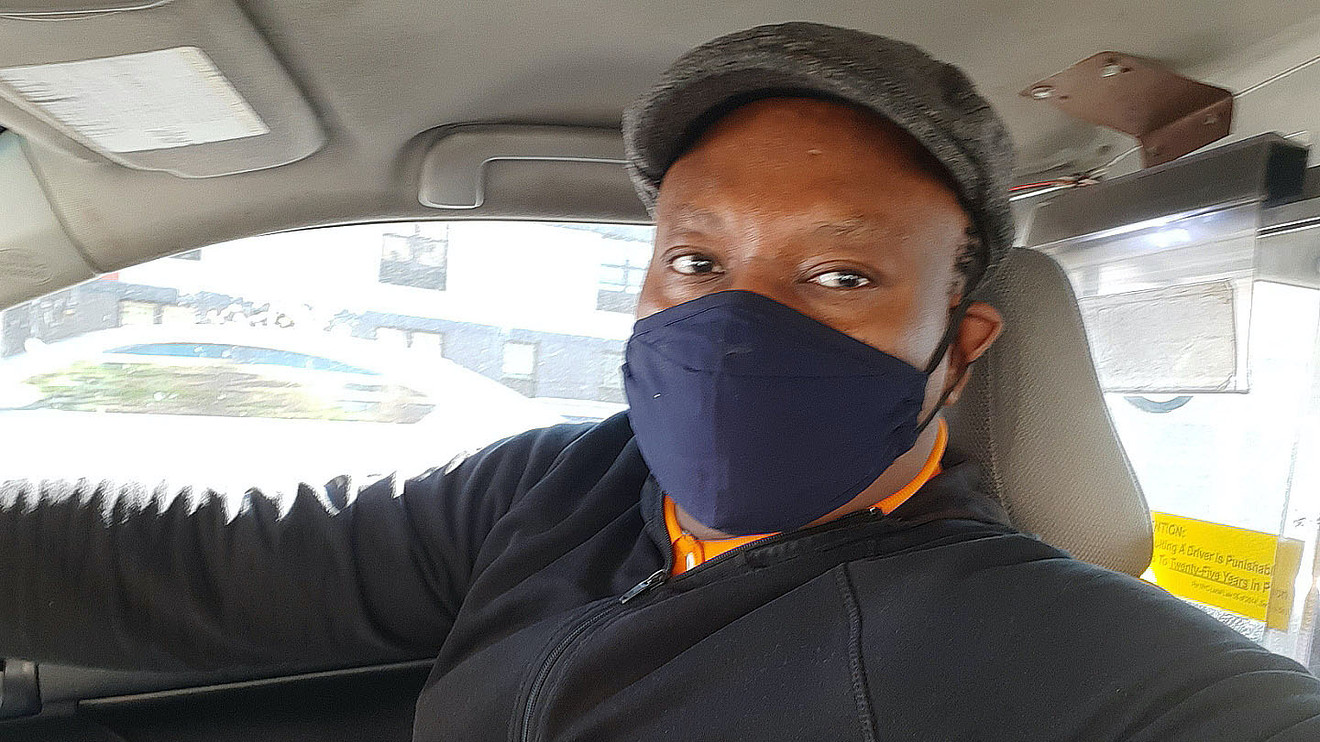 Cruising the empty streets is all but hopeless. Who hails a yellow cab in the middle of a deadly pandemic?

Sitting in the bullpen at Kennedy Airport is a maddening waste of time. Six or seven hours for a single fare!

“Me? I like supermarkets,” New York City taxi driver Mouhamadou Aliyu was saying, sharing his latest COVID-era, essential-worker, business-development strategy. “I wait in front of the Whole Foods at Seventh Avenue and 24th Street. If that’s no good, then I go to Trader Joe’s.”

It takes a savvy driver to eke out even a tiny living at a time like this. In a business already badly battered by ride-hail apps and boom-and-bust medallion prices, a public-health lockdown! Are you kidding me?

Like most New York taxi drivers, Aliyu comes from someplace else, West Africa’s Ivory Coast. He lives in the West Farms section of the Bronx. He has a wife and four children back in the home country. At 48, he’s been making his living one fare at a time for 18 years, 17 and ¾ of which were nothing like today.

“Pay rent, buy groceries, send money home — that’s not so easy now,” he said. “My wife, she is very nervous. She is worried all the time.”

Drivers are earning barely one-third of what they were making at the start of the year, according to a survey by his union, the New York Taxi Workers Alliance. One industry group pegged the passenger fall-off at 90%.

Read more: Updates about New York City, the epicenter of the coronavirus pandemic in the U.S.

Now, all the city’s taxi garages have slashed their lease rates—from the old $110 or $115 for a 12-hour shift to something in the neighborhood of $60. Some are offering straight 50/50 splits on all the credit-card fares—driver keeps the cash. One Bronx garage, Gotham Yellow at Canal and 138th streets, is offering 24-hour leases for $70, Aliyu said. “A year ago, that would have sounded like a gift to me. Now, if you have to pay that much, maybe you go home with $50.”

If you go home at all.

Almost every day, Aliyu said, he hears about fellow drivers who’ve been stricken by the virus and have died. Long active in the union, he talks to many drivers and their families. “A lot of people I know passed away already,” he said. “One week ago, it was a Haitian driver I know. Then, his son died. I am crying one week ago. Then, I am crying again.”

And the number seems to be going up, not down, he estimated, as idle drivers grow ever more tired of staying inside and others just feel more broke.

“Most of us are very scared now,” Aliyu said. “We think it’s not safe to be driving. But we do not receive unemployment. No help at all. Most of us are short of cash. We try to be careful. But we need to survive. This is what we do for a living.”

Inside his regulation-yellow Toyota Camry, a thick, plastic partition separates him from the passengers. But the partition is far from air tight. It was designed to stop a robber’s knife or bullet, not seal out microscopic viruses.

Be sure to read: Could antibody testing be key to reopening New York’s economy?

“I wear my mask all the time and my gloves,” he said. “Nobody gets into the front seat with me. Whenever I drop someone off, I open my back door and spray the Lysol everywhere. Then, I will be ready when I pick up another fare.”

So do all those precautions make him feel safe?

“That is a good question,” the veteran driver said. “It is a little bit confusing. It is like a police officer going on the street, trying to do his job. We don’t know if we come back home or not.”

The customers, he said, are just as worried as he is.

Also see: Stories of the lives lost during the COVID-19 pandemic

And things that would have felt like nothing not so long ago, they can seem like life-or-death now.

“When I’m in the car with a passenger,” Aliyu said, “I am thinking to myself: ‘Don’t cough. Whatever you do, don’t cough. Don’t do it.’ I know it will upset the passenger.”

And the jitters flow both ways, for sure. He can feel it every time he glances in the rearview mirror.

“When the passenger coughs or sneezes, I get nervous, yes,” the driver said at a time when a cough can mean a death sentence. “I can’t wait to drop you off. I will be very happy when the ride is over.”

Ellis Henican is an author based in New York City. He is a former newspaper columnist.