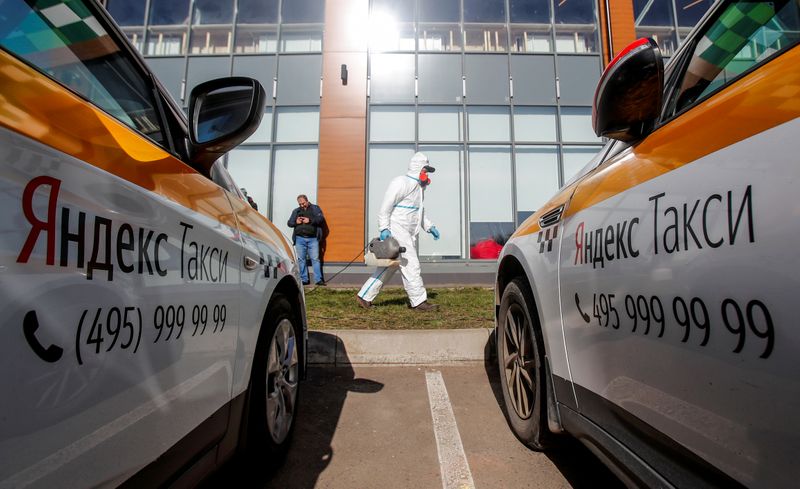 MOSCOW (Reuters) – Yandex .Taxi, the ride-hailing arm of Russian internet giant Yandex (O:YNDX), is hoping to remain profitable in the second half of this year despite a sharp drop in sales as coronavirus restrictions keep people across the country at home.

Yandex was preparing for a initial public offering (IPO) of its taxi segment in the first half of 2020, three banking sources told Reuters in November, and had already hired three investment banks for the purpose, but the coronavirus outbreak has put market events on hold.

President Vladimir Putin on Tuesday extended a non-working period across the country until May 11 to curb the spread of the coronavirus, leaving many business operating under distance working regimes and citizens asked to avoid large gatherings, thereby reducing the number of journeys made by taxi.

Since the start of April, Yandex.Taxi’s gross merchandise volume (GMV) in Moscow has dropped by 60% compared with the same period last year, and by 70% in year-on-year terms since the beginning of March, said Daniil Shuleiko, general director of Yandex.Taxi, during a conference call.

“We started seeing a slowdown in the second part of March due to fears of the spread of COVID-19,” he said. “As a result, if in early March we were seeing almost 5 million rides per day, towards the end of March this number decreased significantly.”

According to Yandex forecasts, if GMV in the second quarter falls by 60%, the company will record negative EBITDA, but a fall of 40% would see the company break even.

“I do not have an exact forecast, but we expect some recovery in the third and fourth quarters … If we compare the second half of 2020 with the first half, we expect that the taxi service will be profitable,” said Evgeniy Senderov, Yandex.Taxi’s finance director.

Yandex.Taxi, in which Uber (N:UBER) has 36.6% stake, still has a $390 million buffer working in its favour, in cash, cash equivalents and term deposits.

“We are in good shape to get through the current situation, we have strong balance sheet,” he added.