Home
Stocks
CityWatch: Plasma treatment offers hope in New York City, but it’s too early to tell if it’s a silver bullet
Prev Article Next Article
This post was originally published on this site 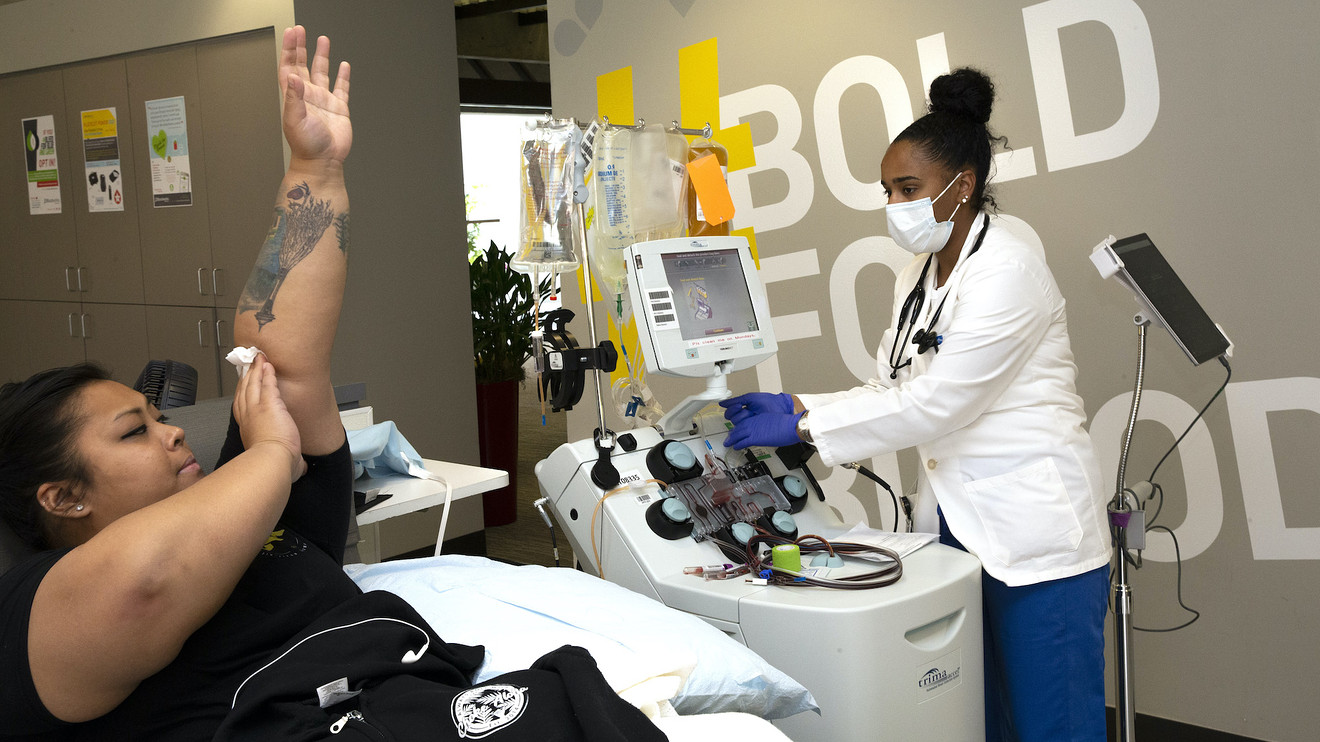 Over the past two weeks, more than three dozen New York City hospitals have signed up to inject their sickest COVID-19 patients with blood plasma from people who’ve recovered from the virus as part of a sweeping national study into the potential treatment.

The scores of health-care facilities, which include all 11 public hospitals in the city, several veterans’ hospitals, cancer centers and major research institutions such as the Icahn School of Medicine at Mount Sinai, have clamored to join the expansive study as health-care workers desperately hunt for more ways to save those critically ill with the coronavirus—which has killed more than 10,000 people in the city.

Little is known regarding the effectiveness of convalescent plasma specifically in treating COVID-19 outside a few small but promising studies in China. U.S. researchers say the nationwide study will help determine the treatment’s safety and its potential as a stopgap treatment until there’s a vaccine. Separate clinical trials are also exploring if convalescent plasma could protect frontline workers from getting it—for instance, nurses and police officers, who’ve watched the disease sweep through their ranks in New York City.

“We’re hearing interesting positive case reports,” said Dr. Michael Joyner, a researcher from the Mayo Clinic who is leading the national convalescent plasma project. But in speaking to people anecdotally, “nobody tells you about your bad cases.”

More than 1,600 health-care facilities, ranging from major research institutions to clinics in rural Lawton, Okla., have joined the study since it got federal approval earlier this month, Joyner said.

“ “The reality is this is still an experimental approach. A lot of people think that they can give blood and save a lot of lives, but it will take weeks if not months to know if that’s true.” ”

— Dr. Kevin Tracey, CEO and president of the Feinstein Institutes for Medical Research

As of Tuesday morning, nearly 1,000 patients had received the plasma treatment through the national expanded-access study, most of them in hotspots like New York, Joyner said.

“That’s where the patients are and where most of the product is,” he said, referring to the donated plasma.

“We need that plasma from people who were infected,” he said, announcing the mass blood drive at an April 9 news briefing. “Donate blood so we can develop the convalescent plasma treatment.”

Also read: The future of coronavirus testing: At work, in church, and self-administered tests at home

“The donors have been very willing to do whatever it takes,” Sachais said.

Plasma is a yellowish fluid that carries red blood cells through the body. A typical donation takes about an hour and usually results in the plasma being separated from the red blood cells, which are then returned to the donor intravenously. A sick patient can, in theory, benefit from the antibody-rich fluid much the same way a newborn baby gets its immunity from a mother’s breast milk until the child can build its own defenses.

There are supply constraints on any biological product, but convalescent plasma is particularly limited first and foremost because of testing capacity, Sachais said. Many people who carry the potentially lifesaving antibody in their blood may never have gotten an official diagnosis, which donors need to present in order to donate.

Beyond that, blood donations are highly regulated, barring people who are under 110 pounds, under 17, pregnant and limiting donations from gay men, even in New York City. The U.S. Food and Drug Administration (FDA) recently relaxed its rules regarding gay men, lowering the amount of time since the last sexual encounter from a year to three months—though many advocates say the FDA didn’t go far enough given the overwhelming need for blood during the crisis.

As a result of those guidelines, about 20% of the U.S. population qualifies for a regular blood donation and recovered patients make up a sliver of that, Sachais said. New York Blood Center has ramped up its capacity to try and mitigate the shortage and can now draw from roughly 1,500 donors a week across its locations in New York City and on Long Island. A single donation can usually treat two or three patients.

Not a silver bullet

The experimental treatment has in recent days become something of a silver bullet in the imaginations of people with loved ones quickly deteriorating from COVID-19 in hospitals. Friends, sons and daughters and cousins have poured onto Facebook FB, +7.55% groups and other online forums pleading for blood-type compatible plasma donors to come forward.

“PLASMA DONOR NEEDED IN BROOKLYN NY,” a colleague of a sick subway conductor posted on the local union Facebook page last Wednesday. “He needs a matching donor or donors to come to his assistance now.”

But those sorts of directed donations that many are clamoring for are not possible, by and large, said Dr. Kevin Tracey, CEO and president of the Feinstein Institutes for Medical Research, located just outside of New York City in Manhasset, Long Island. He also said doctors, researchers and the media should be very cautious about overpromising the treatment.

While the Feinstein Institute is participating in Mayo Clinic’s national expanded-access study, a type of study known as a “case series” or “compassionate-use study,” Tracey also advocated for a more rigorous, clinical trial. In the national study, every patient receives the treatment, as opposed to a randomized controlled study, in which some patients would get a placebo. That would paint a definitive picture of whether it was the treatment behind patients’ recovery and not people getting better on their own, he explained.

“The reality is this is still an experimental approach,” he said. “A lot of people think that they can give blood and save a lot of lives, but it will take weeks if not months to know if that’s true.”

Researchers at the Mayo Clinic will likely glean the first insight from the study in the next couple of weeks, once enough information is collected on around 1,000 patients. But that first report will likely address the treatment’s safety, only, Joyner said.

“You have to know how many people it hurt,” Tracey said.

At the moment, the national study in which scores of New York City doctors are participating is focused on patients with “severe or life-threatening COVID-19” or at high risk of progression to that stage, according to the guidelines. Those are people on ventilators or facing septic shock and organ failure.

But plasma treatments have historically worked as a prophylaxis in other diseases, said Arturo Casadevall, an immunologist leading the plasma research at Johns Hopkins University in Baltimore. In other words, a plasma injection could help nurses, doctors, police officers and other first responders from catching the disease while exposed on the frontline.

That’s of particular importance to a hotspot like New York City, where the virus has hit thousands of police officers, and a nurses union says 1,000 members have tested positive. The union, in a series of lawsuits filed against the state health department and two hospitals this week, said protection provided to New York nurses was inadequate. Some 20% of the NYPD’s uniformed workforce is calling out sick each day, and around 30 people employed with the police department have died.

“Antibody treatment always works best when you give it early, when people experience shortness of breath but before they get to a state of respiratory failure,” Casadevall said, citing common preventive antibody treatments for rabies and Hepatitis. The FDA recently approved a clinical trial at Johns Hopkins that will test convalescent plasma as a therapy to guard healthy front-line medical staff. Researchers there also hope to explore whether plasma is effective during the very early stages of the disease, when people are only mildly sick.

“The science behind convalescent plasma is pretty strong, but this is a new virus,” he said. “You need to test and you need to do things right.”