Home
Stocks
Exxon, Chevron expected to post steep drops in earnings for third quarter
Prev Article Next Article
This post was originally published on this site

Exxon and Chevron report earnings on Friday before the bell as energy companies continue to struggle, pressured by falling oil prices, waning demand and squeezed margins.

The Street is expecting Exxon’s earnings to plummet by more than 50% from a year ago. For Chevron, it’s a more modest 29% decline. 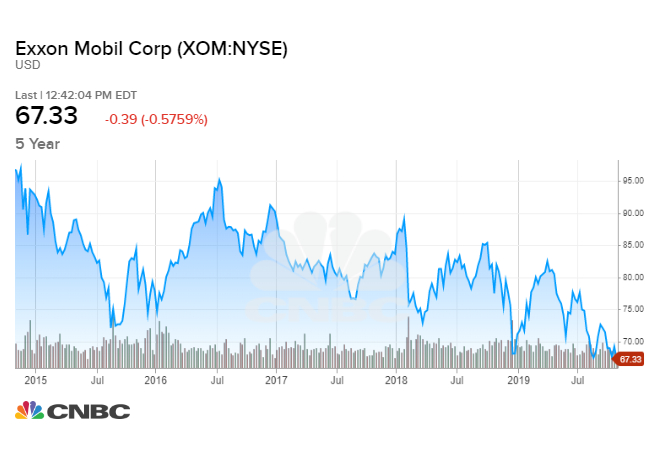 Exxon is expected to report third-quarter earnings of 67 cents per share, according to estimates from FactSet, and $60.9 billion in revenue.

The EPS number is 54% below the $1.46 the company reported in the same quarter a year earlier, while revenue forecasts are 20% lower than the $75.68 billion the company earned in the third quarter of 2018.

Analysts were more or less warned ahead of time that the company might continue to face headwinds this quarter.

In an Oct. 1 8-K filing with the Securities and Exchange Commission, Exxon said that weak oil prices could detract $400 million to $700 million from earnings in the third quarter. The filing said that “market dynamics, seasonal patterns, and planned activities” were among the additional factors that could contribute to a decline in earnings.

Earlier this year, the company began filing 8-K updates with the Securities and Exchange Commission immediately after the end of the quarter in an effort to provide a more up-to-date picture for investors and analysts, and to help them set expectations ahead of the company’s official earnings report.

Following the Oct. 1 filing, Mizuho analyst Paul Sankey slashed his earnings expectations for the quarter from $1.04 to 65 cents since the company “continues to struggle to generate strong earnings.” While he said that earnings should improve from the prior quarter, he expected the improvement to be offset by lower oil prices.

The company has been spending heavily to enhance production, including in the oil-rich Permian basin, and J.P. Morgan’s Phil Gresh said it might be one of the reasons, along with Exxon’s dividend, that the stock hasn’t been hit harder this year.

“XOM has seen the greatest degree of negative earnings revisions among its global majors peers for both 2019-20, though the stock has held in quite well. … We think that this could have to do with XOM’s 5% dividend yield and expectations of future earnings improvement from major capital projects underway. 2020 will be an important litmus test on this front,” he said in a note to clients dated Oct. 15. He has a neutral rating on the stock, and is expecting the company to earn 65 cents per share for the quarter.

Last quarter, Exxon beat top- and bottom-line estimates, as strength in the company’s upstream business offset weakness in the refining and chemical divisions. Profit did decline by 21%, however.

On Sunday President Donald Trump said he’s interested in making a deal with Exxon or another energy company to tap Syrian oil reserves.

“What I intend to do, perhaps, is make a deal with an ExxonMobil or one of our great companies to go in there and do it properly … and spread out the wealth,” he said.

Shares of Exxon have lost 16% in the last year. The company currently pays a dividend of 5.18%.

Analysts polled by FactSet are expecting the company to report earnings of $1.49 and revenue of $38 billion. This compares with EPS of $2.11 and revenue of $43.99 billion in the same quarter a year prior, so this quarter’s numbers represent a 29% and 14% decline respectively.

Raymond James analyst John Freeman has an outperform rating and $132 target on the stock. His EPS estimate of $1.58 is above consensus.

“Given its upstream-weighted and oil-centric asset base, Chevron offers a higher degree of leverage than most of its peers to our forecast for oil prices to reach six-year highs in 2020 … the Permian overweight is undeniably needle-moving, reaching 14% of the production mix,” he said in a note to clients dated Oct. 17. 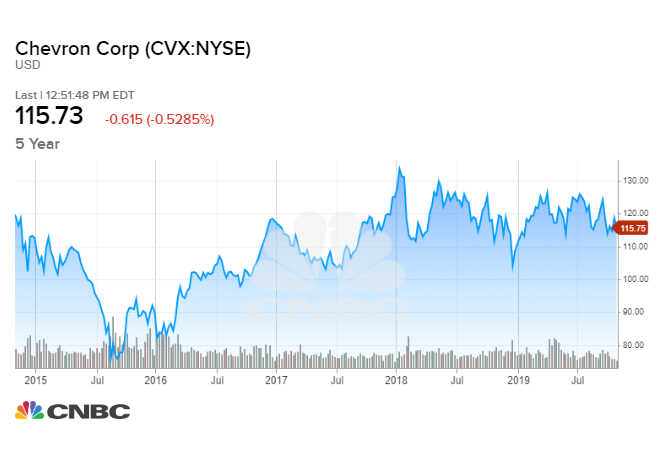 J.P. Morgan’s Phil Gresh echoed this point, citing the company’s improving free cash flow and strong balance sheet as reasons to be bullish on the stock. He has an overweight rating on shares of Chevron and is expecting the company to report earnings per share of $1.55.

“CVX has an attractive global asset base with the potential for solid production growth and best-in-class cash margins versus global integrated peers,” he said.

Falling oil prices, oversupply concerns and high production are among the factors that have hit the energy sector hard. It’s also especially vulnerable to any signs of a global growth slowdown.

Energy is the only negative S&P sector over the last year, shedding 15%, and it’s also the worst-performing S&P sector this year. The sector currently makes up just 4.3% of the S&P due to years of declining performance as well as the surge in technology stocks, among other things. By comparison, 10 years ago energy was 12.4% of the S&P. 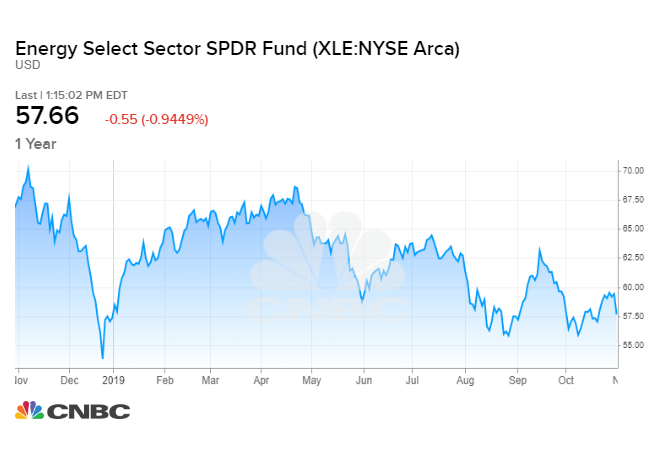 For the third quarter, Refinitiv looked at the blended earnings data, or estimates of companies that have already reported and the consensus estimates for names that have yet to report, and found that earnings from energy companies in the S&P have declined 37.9% from a year earlier. Revenue is down 8%.