The logo of Amazon can be seen on the apps on a smartphone.

The strategy involves buying companies such as Microsoft, Amazon, Google and J.P. Morgan Chase as the U.S.-China trade war has hurt share price and fundamentals of goods-producing companies.

“Services stocks have less exposure to trade conflict given they have lower foreign input costs that might be subject to tariffs and lower non-US sales than Goods firms,” Goldman Sachs chief U.S. equity strategist David Kostin said in a note to clients.

The trade war between the U.S. and China escalated in recent weeks after Trump’s surprise announcement of 10% tariffs on the remaining $300 billion in Chinese imports that had eluded duties. Markets had their worst day of the year on Aug. 5, after China let its currency weaken, crossing the 7 yuan-per-dollar threshold, and said it would halt imports of agricultural goods from the U.S.

Kostin said services stocks including Facebook and Verizon have faster sales and earnings growth, as well as stabler margins than goods firms. Services stocks have outperformed goods-providers by 530 basis points in 2019 and by 150 basis points since the start of the third quarter, Kostin said.

“Stronger services inflation should also benefit those firms relative to Goods firms. However, the relative valuation of Services vs. Goods is slightly elevated vs. history,” he added.

The top industries for services are software and services and media and entertainment. Walmart and Berkshire Hathaway are also in Goldman’s service stocks basket.

The firm does not expect a trade deal before the 2020 election. 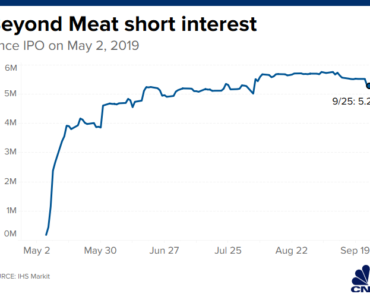