CNBC’s Jim Cramer had a piece of advice for everyone that watched the stock market collapse and extend its multi-day losing streak on Monday as the U.S.-China trade war intensifies: Don’t panic.

The Dow Jones Industrial Average plummeted nearly 770 points to record its worst trading day of 2019. The S&P 500 and Nasdaq Composite fell for their sixth-straight sessions to pull back 2.98% and 3.47%, respectively. However, the “Mad Money” host suggested there are picks that can be made on the decline.

“Nobody ever made a dime panicking. Take a deep breath, keep your head. Remember that stocks get cheaper as they go lower if there are quality companies behind them,” he said. “If you slowly buy the stocks of companies with great fundamentals, you’ll be in good shape when the smoke clears.”

Days after President Donald Trump proposed a new round of tariffs on Chinese imports, China’s currency against the American dollar dropped below a key level on Monday, CNBC reported. This is the first time since the 2008 financial crisis, according to Reuters, that both the onshore Chinese yuan and offshore yuan exchanged against the U.S. dollar 7-to-1.

Some analysts have framed the weakened currency as an effort to retaliate to Trump’s move to impose a 10% tariff on remaining Chinese goods. The president himself called it “currency manipulation.” The country’s central bank, however, denied that it reduced the price of its money as a counter move.

Stocks of domestic companies are buyable, Cramer said. He suggested investors gradually begin buying shares of stocks, in stages, that are down 10% from their highs.

Cramer said the market “hit some big milestones … that make me want to call the bottom,” but there are a number of things he is looking to happen first.

“On the one hand, I do think you need to start putting money to work tomorrow. Not at the opening, see what happens. Wait ’til it’s down,” Cramer said. “On the other hand, I’m hesitant to tell you to buy stocks aggressively. You need to be a little cautious, you need to be patient.”

With potential new tariffs, the host is expecting to see the analyst community in coming days to issue downgrades and forecast cuts on a host of companies with Chinese exposure. Using Apple, who assembles iPhones in China, as an example, Cramer said he won’t get more bullish on the stock until firms initiate estimates and price target cuts.

Investors need to be alert that Trump could later decide to increase the pending slate of tariffs on $300 billion worth of Chinese imports to 25% from the initial 10% tax, he added.

Tension in Hong Kong, including ongoing protests and a general strike, is another weight on the market, Cramer said. He also counted the 2020 presidential election as another point of uncertainty saying the Chinese government “misread the political situation here in America” by stalling in hopes to strike a trade deal with a “more-friendly” Democratic administration. Cramer thinks Democratic hopeful and Mass. Sen. Elizabeth Warren, if elected president, would be tougher on China than Trump.

One final cause for concern is that stocks have yet to oversold, although the major indexes have not had a positive session in more than a week.

The bond market, however, is one reason the host is suggesting that there are plays to be made in the market. The 10-year Treasury yield, used as a proxy for mortgage and auto loan rates, dropped to nearly 1.73%, Cramer noted. That’s the lowest level in nearly three years, CNBC reported.

“If you’re an investor who wants income … dividend stocks are pretty much the only game in town,” the host said. “So there’s a whole cohort of 3% yielders that’s become a lot more attractive here.” 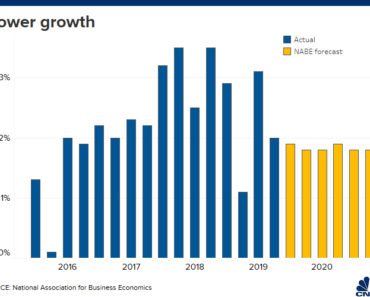