Home
Stocks
The likelihood that the stock market rips higher suddenly is increasing, Barclays says
Prev Article Next Article
This post was originally published on this site

Traders work the floor at the NYSE in New York.

Barclays believes a market “melt-up” could be on the horizon if three things materialize in the near future: A trade truce,  Federal Reserve rate cuts and the economic slowdown only being a soft patch.

The so-called melt-up refers to a sharp move higher driven by investors late to the game looking to get in on a momentum shift. It is often a sign of a late-stage bull market.

A melt-up “is indeed possible, but would require a confluence of several outcomes: 1)Trade tensions decrease substantially; 2) The Fed eases aggressively; 3) The current industrial slowdown remains a soft patch and does not morph into a full recession,” Maneesh Deshpande, head of equity derivatives strategy at Barclays, said in a note Tuesday. “Although this is not our most probable scenario, we acknowledge that its likelihood has increased.”

The S&P 500 hit a record last week, on pace for its best first half of a year since at least 1997, as Wall Street cheered the possibility that the Fed will start cutting rates as soon as next month. Many central bankers have slashed their rate outlook and they also dropped “patience” in its statement, which caused traders to bet on a 100% chance of at least a quarter-point cut in July, according to the CME FedWatch tool.

However, a melt-up could also presage the end of the recent bull run. Billionaire investor Leon Cooperman said Thursday a really big move higher in stocks could signal “the close-out move.”

An easier policy from the Fed during past economic slowdowns has historically resulted in “substantial valuation-driven equity rallies,” Barclay said, adding a similar move could send S&P 500’s price-to-earnings ratio to 20 times, pushing the index to 3,250, 10% higher from here.

“There are now signs that the Fed will remain aggressive irrespective of trade tensions, which is likely to be viewed by equity investors as the Fed erring on the side of being ultra loose,” Deshpande said.

The bank now expects the Fed to cut the federal funds rate by 50 basis points in July and 75 basis points this year.

A meeting between President Donald Trump and Chinese leader Xi Jinping at this week’s G-20 summit has revived hope for a truce between the two nations. However, a quick fix at the meeting seems unlikely.

“While we cannot rule out a detente, we and the markets remain skeptical of a meaningful change at the G20 meetings,” Deshpande said. “A substantial truce which gets extended as U.S. election nears” is what the market needs to rip higher, he added.

Trade tensions between the world’s two largest economies escalated in May after the Trump administration hiked tariffs on about $200 billion worth of Chinese imports. China then retaliated with higher duties of its own, while Trump also threatened to slap tariffs on an additional $300 billion in Chinese imports.

Stocks which are sensitive to tariffs have not bounced back even as the optimism has increased, Barclays pointed out.

The corporate earnings picture continues to worsen as Wall Street analysts are now indicating negative earnings growth to drag out to the third quarter, which would mark the first three-quarter decline in three years, according to the latest FactSet calculations.

Stocks could only go higher if the current earnings slowdown doesn’t morph into a full-on recession, Barclays said. The bank expects flat to slightly negative earnings growth for this year similar to the earnings recession 2016.

If “the current industrial recession bleeds into the broader economy and even if Fed eases, they cannot stave off an equity selloff of about 20%,” Deshpande said. 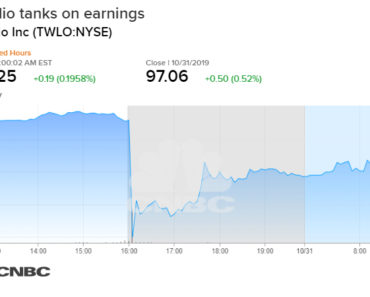