Home
Stocks
Goldman's portfolio of investors' favorite stocks is crushing the market, returning 16% this year
Prev Article Next Article
This post was originally published on this site

Traders work on the floor of the New York Stock Exchange (NYSE) on February 6, 2018 in New York City.

While most of the stock market is in turbulence amid the trade chaos, Goldman Sachs has a portfolio that’s crushing the market, returning more than 16% year-to-date.

Many of the bank’s portfolios created exclusively for its clients are underperforming the S&P 500 during heightened market uncertainties, including one tracking hedge funds’ top holdings and one with large-cap mutual funds overweights, but the stocks that overlap those two baskets have delivered stellar performance this year.

“The underperformance of popular positions today following President [Donald] Trump’s announcement of tariffs on imports from Mexico underscores investor concern about crowded positions,” Goldman’s chief U.S. equity strategist, David Kostin, said in the note. “The ‘wisdom of the crowds’ can be a positive signal for subsequent stock returns.”

The overlapping stocks are 12 companies most popular with both hedge funds and mutual funds. They include Adobe, Citigroup, Google parent Alphabet, PayPal, UnitedHealth, Mastercard, ServiceNow and Visa, Goldman said. They have outperformed the S&P 500 by 6.1 percentage points so far in 2019.

While a few stocks on Goldman’s list are weighed down by the escalated trade tensions, Visa, UnitedHealth, PayPal and Mastercard all held up well in May. Notably, ServiceNow surged a whopping 18% in the past month on strong first-quarter earnings.

The S&P 500, which has returned about 10% year-to-date, lost more than 6% in May alone, amid the tit-for-tat threats in the ongoing U.S.-China trade war. The sell-off deepened after the U.S. announced a 5% surprise tariff on all Mexican imports last week.

Stocks popular among mutual funds and hedge funds, the so-called “shared favorites,” also have a long track record of beating the market, the bank noted. They have generated an annualized return of 19% since 2013, higher than the S&P 500’s 13% gain over the same period. 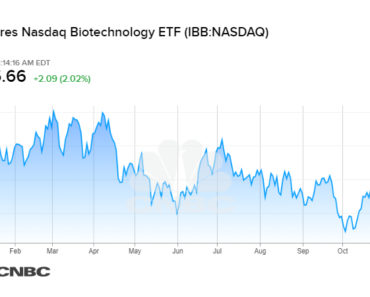